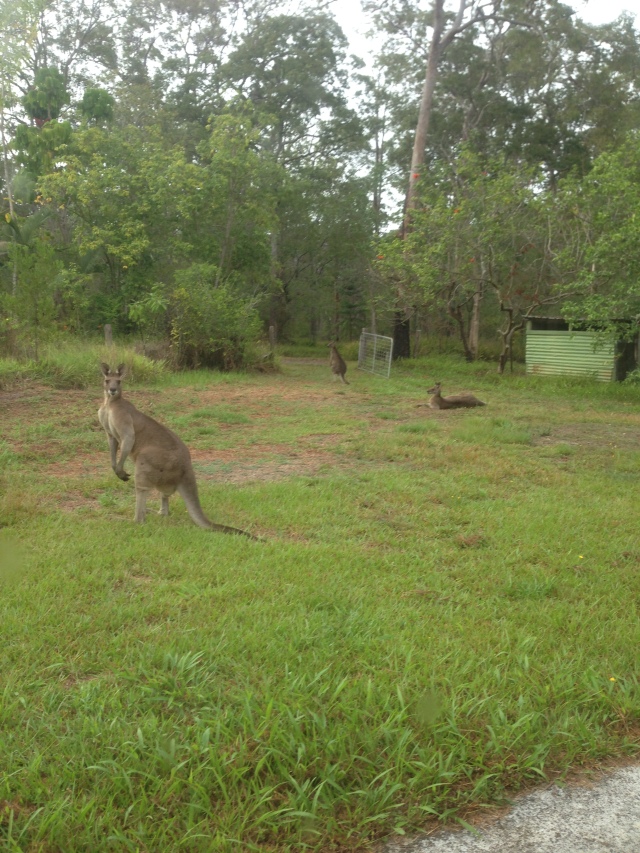 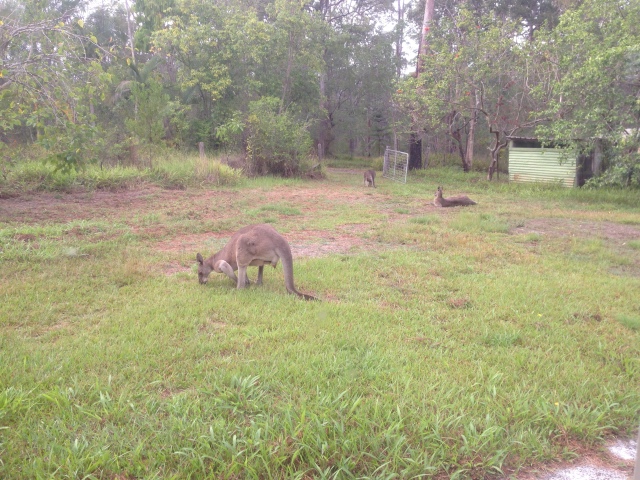 At about 7 AM, morning of Sunday 11th February 2018, returning from a brief Japa walk, I proceeded up the road, when I noticed a kangaroo entering my driveway (in fact, Krishna’s driveway) at about 100 meters distance or so.

As I entered the driveway, I noticed that he was still present.

Let us remember Srila Prabhupada’s words, in New Jersey, USA, in convalescence after His heart attack in 1967, to His disciple Govinda dasi:

“Prabhupada was sitting in the back yard when Govinda dasi saw a large slug climbing on a wall. She showed it to Prabhupäda. “Chant to the poor thing,” he said, and she began to chant Hare Krishna.” extract from Srila Prabhupada-Lilamrta by Satsvarupa das Goswami, Vol 3.

For some unknown reason, I have always remembered this situation, along with Srila Prabhupada’s instructions and interpreted that the best service a devotee of the Lord can ever render in the presence of any animal, or plant or any living being whatsoever for that matter, is to chant the Hare Krishna maha mantra quite loudly for the animal / plant / living entity to hear distinctly. This is mantra or sound vibration therapy. It is said that in India, some experts are able to cure venomous snake bite simply by applying relevant sound vibration. No need for anti-venom serum. The best of all sound vibration therapy for all kinds of dis-eases, physical, mental, intellectual and spiritual, is the steady chanting of the maha mantra Hare Krishna as in

Please note well: It’s absolutely free of any financial encumbrances !!! But to increase its efficiency a thousandfold it will be wise to follow the four yogic regulative principles: 1) no illicit sex, 2) no meat, no fish, no egg eating, 3) no gambling, 4) no intoxication.

In this particular situation, I put this spiritual advice coming directly from the Spiritual Master into practice and to my amazement the kangaroo was interested. He simply could not leave the place. Except for a few cases, kangaroos generally are quite shy animals and flee immediately the presence of humans. Some of them are just huge-taller than average human-and there have been reports of kangaroo attacks as well. Despite all the imagery about and popular fascination with the kangaroos, they are after all wild animals, living the tough natural life.

I have also noticed that even in the heaviest of rain, kangaroos will not make the least efforts to find shelter, even if it is available. They will just tolerate the water and wetness. They might even keep eating grass instead or lie down to relax. Neither does it seem that they are catching a cold, as we humans do so easily in such situations. In Siksastaka, stanza 3, Shri Caitanya Mahaparabhu, Who is none other than the Supreme Personality of Godhead Himself uses the phrase “one should be more tolerant than a tree”. He might as well have said “one should be more tolerant than a kangaroo”.

So this kangaroo just could not leave. He was mesmerized by the Hare Krishna maha mantra in some ways. He started turning in a circle of about 3 to 4 meters diameter around me. He constantly moved his ears as well. He was standing up right, staring in my direction. He moved, contorted and scratched his body, as if dancing. At some stage, he repeatedly uttered the typical kangaroo low tone grunt. That must have been some sort of a call, because immediately another two kangaroos appeared from nowhere. As I was a little apprehensive myself, I thought: “O there is here a real chance I might become victim of a mass kangaroo attack.” But the other two kangaroos disappeared as fast as they came, when they saw me. This must have been a misinterpreted kangaroo call, perhaps sexual, as the one close to me was a male. I have no information about the gender of the two newcomers. I kept on chanting the Hare Krishna maha mantra loudly and the one kangaroo came as close as sniffing my finger. Still a little apprehensive, I decided that was enough for a first close up kangaroo encounter and we parted our ways. I shall try to be a little more kangaroo friendly next time, after all these animals are also some sort of gurus as well. They are kan-gurus, can-gurus or can-do-gurus!

Srila Prabhupada also makes the point that animals living on Krishna properties are special, because at least they get life time guarantee not to be killed. All too often we have seen that the first reaction of an ordinary person is to squarely squash the spider or ant as soon as it comes into view. This behaviour is very regrettable for both parties. The animal looses his life and the killer will have to face killing charges in the government of the Lord. We may escape the vigilance of the police force. But the government of the Lord is more effective and subtle than even highly sophisticated computer surveillance. Everything is taken into account. Nothing gets overlooked.

Hare Krishna! All glories to Srila Prabhupada, the saviour of planet earth!