We are always eager to see what will happen next, what the future holds!

In the mundane atmosphere such wait for the outcome of important matters is often accompanied by wrenching anxiety.

But in the spiritual Krishna atmosphere, the closer we get to Sri Krishna, the less material anxieties and the more genuine spiritual bliss we experience.

To travel on behalf of and with Krishna on the path of life means excitement only.

LORD CAITANYA MAHAPRABHU’S 500 years old HARI NAM SANKIRTAN MOVEMENT goes on and on and on:

Epilogue: No rain this time but only just. When I returned to my Ashram I realised that rain or no rain was simply a matter of location as everything seems rained out on this side. It’s raining now Feb 14, 2022, 1 AM. Rain determines my whereabouts as my vehicle gets stuck immediately on non asphalt or non concrete environment. Even wet grass, it gets stuck and I have to call RACQ for help. You really would not want to be without RACQ, as the slogan goes. Two notable events:

Tomorrow, Sunday 6th of February 2022, at 17.30 hours,  Noosa Heads Surf and Life Saving  Club car park meeting point for the fourth –fifth overall–Hari Nam Sankirtan party in Noosa Heads. (Unless, of course, the weather forbids it. During the week we had some heavy rain and strong winds, with some roads closed due to flooding and subject to fines for disobedience. Also, there was at least one heavy lightning strike with a bomblike thunder close by which destroyed my neighbour’s TV and internet modem– the full force of nature in display.) The official slogan about the Queensland weather goes: “Beautiful one day and perfect the next.” But currently, the weather is rather characterized by extreme instability with alternative sunshine and rain. But in Queensland, even the rain is enjoyable because it is warm rain and one need not worry about catching a cold, as one would in Europe for example. The constant and alternated rain and sunshine also bring a new green and enchanting shine to all plants who thrive under such greenhouse conditions. One gets the impression that tall grass grows at the rate of 10 centimeters a day. Sub-tropical Queensland is after all the best place to be, for the time being anyway :):):)

This week I also had the privilege to take advantage of the Surf and Life Saving First Aid Service as I underwent a fall on the beach rocks, a very common occurrence according to the person who administered the aid. He also thought and expressed that my right elbow required stitches. In old age there is a certain stiffness and instability that develop in the body and we may ask: Is this this the precursor of “rigor mortis,” which is the stiffening of the joints and muscles of a body a few hours after death, usually lasting from one to four days?  “Privilege” is of course a misnomer, as one would rather not need the services of First Aid. But there is a purpose in everything. There is a purpose in falling and there is a purpose in meeting the first aid team. The purpose in falling is a warning that as we get older some activities, which we used to enjoy carelessly while younger–like beach rocks climbing–are now strictly off-limits. The time factor just never lets up. During the fall, I remember thinking “What’s next?” and “How is this going to end?” And immediately after the fall I had to sit quietly on the beach for a moment just to recuperate from the shock, even though caring people were enquiring about my well-being.  This instance reminded me of the Russian Hare Krishna devotee who, some years ago, dived headfirst into the Ganges in Mayapur, ISKCON’s Headquarters, West Bengal, India,  not considering the underwater rocks and thus fractured his skull and met instant death in the Holy Dham or Holy Place of Pilgrimage. Luckily, by Krishna’s kind mercy, my head–especially my face– landed in the sand. Among other parts of my body, the root of my nose got wounded so much so that the lady where we buy our irrigation supplies from asked: “What happened to your nose, it’s all red”. Srila Prabhupada Himself decided to stop traveling alone when He fell on one occasion. All glories to the prophet of the modern age His Divine Grace A.C. Bhaktivedanta Swami Prabhupada, formerly a pharmacist in Allahabad, UP, India!  Epilogue: the mood was dampened by the rain and streetwalkers were lacking. The temperature is dropping and it feels like the summer is coming to an early end. –Grey nomad migration time.– To counteract I improvised new, blissful, and successful tunes away from the beaten track. It felt like a stage star. “Tonight the super trouper lights are gonna find me. Shining like the sun. Smiling, having fun. Feeling like a number one.” Benny Andersson / Bjoern K Ulvaeus. Abba. In the end, the rain won and we had to interrupt abruptly the public chanting of

This week we are planning HARI NAM in Gympie, a Queensland country town full of wonderful people, just 170 km or 103 miles north of Brisbane, the state capital and Olympic winner 2032.  Please stay tuned. We will advise date in due course. Besides meeting a Bangladeshi gentleman full of Krishna conscious potential, along with his female companion,  the Jan 30th HARI NAM in Noosa was uneventful. The town was rather quiet, with no police in sight at all. But still people were waving from their private balconies and hotels. We also distributed some of our Hare Krishna Mantra bracelets. One gentleman with kids spontaneously shouted: “Haribol, Haribol, Haribol…” This party definitely accepted four free Hare Krishna bracelets. He thought I was selling them. But fortunately it was a money free day, which unfortunately does not happen very often. We should have more money free days! What do you think?

ISKCON Perth is delighted to invite you again to the colorful and vibrant Annual Ratha Yatra (Chariot Parade) festival on Sunday 12 December 2021 at Forrest Place, Perth after an overwhelming response from the event held in 2019.

The Chariot Parade takes place twice with the first starting at 12:00pm then at 3:45pm, both originating at Forrest Place, moving along Murray Street mall to the Perth Underground station and then to the corner of Barrack Street and Murray Street through the mall and finishing back at Forrest Place.

The 2019 festival at Elizabeth Quay was a great success and attracted hundreds of locals. A lot has been planned for this year’s event with music, dance, singing and sumptuous vegetarian meals. We are very excited to see all of you at this wonderful event for the pleasure of our Deities Sri Sri Lord Jagannath, Lord Baladev, Subhadra Devi.

Ratha Yatra Festival History:
Ratha Yatra started 5000 years ago in the  town of Jagannatha Puri, Odisha, India. This festival celebrates the return of Lord Krishna to Vrindavan and is held annually during the months of June-July to honour Lord Jagannath.

Usually, the Deities of Lord Jagannath, Balarama and Subhadra are worshiped in the temple, but on the day of Rath Yatra, They are taken to the streets so everyone gets the opportunity to see Them. Richly decorated chariots and resembling temple structures cross the streets of Puri Jagannath. This commemorates the annual journey of Lord Jagannath, Balarama and his sister Subhadra to Gundicha temple located 2 km from the main temple. During the festival, devotees from all over the world visit Jagannath Puri with a sincere desire to pull the cart by ropes. The soulful vibrations of the songs with drums, tambourines, trumpets and so on, accompany the procession and the chariots. The event is also broadcasted live on many Indian and International  TV channels.

Festival of chariots was first held outside of India on 9 July 1967 in San Francisco, under the direction of His Divine Grace A.C. Bhaktivedanta Swami Prabhupada. Srila Prabhupada, as he is affectionately known, is the founder-Acharya of the International Society for the Krishna Consciousness. Srila Prabhupada had the idea to hold the festival in the city of San Francisco, looking out the window from his room in Frederick Street. Today, this Festival is held all over the world, including major cities like New York and London etc.

During this festival, the magnificent chariot is pulled by devotees and well-wishers. The chariot carries the richly decorated deities of Jagannath, sister Subhadra, and the elder brother Balabhadra. Jagannath is one of the many names of the Supreme Personality of Godhead, Lord Sri Krishna. The Sanskrit name, Jagannath means the Master (Nath) of the Universe (Jagat) is a very merciful form of the Lord.

Please book your free ticket for the event below:
https://www.eventbrite.com.au/o/govindas-food-for-life-restaurant-29582281515

This event unlike others that are held indoors incurs a lot of effort on all fronts financially, mentally and
physically. We couldn’t make it possible without your love and support.

Do attend such a wonderful event and receive the Lord’s mercy with of full spiritual benefits, Kirtan, Aarti and Spiritual Discourse.

(JULY 2020) His Grace Yadavendra Das, a disciple of His Divine Grace A.C. Bhaktivedanta Swami Prabhupada, the initiator of Lord Caitanya’s the Sankirtan movement in the modern age, is available in Cairns, in the next few weeks for Hare Krishna Satsang. (subject to government coronavirus restrictions.)

Please send your proposals to ajm108@gmail.com for further discussions.

Thank you very much!

KIRTAN WITH MADHAVA CANCELLED DUE TO THE CORONA VIRUS THREAT 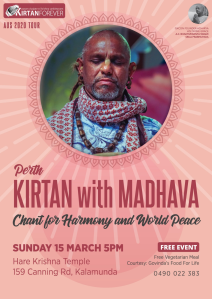 Caitanya Mahaprabhu made His divine appearance on the 18 February 1486

THE SACRED SOUND RETREAT IS NOW CANCELLED DUE TO THE THREAT OF THE CORONA VIRUS.

Please join us for some ecstatic chanting, dancing and feasting, a foretaste of the spiritual world, at

PLEASE JOIN US FOR THE BEST EASTER OF YOUR LIFE. YOU MAY DO IT IN HONOUR OF LORD JESUS CHRIST IF YOU WISH.

DEVELOPING AND INCREASING A CONSCIOUSNESS OF GOD, KRISHNA IS OUR COMMON GOAL. 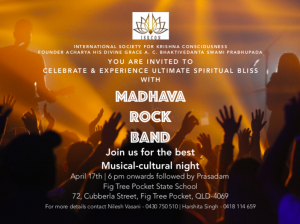 AND AND AND JUST A LITTLE LATER IN BOONE, NORTH CAROLINA, USA

Organised by His Holiness Indradyuman Swami, a direct disciple of His Divine Grace A.C. Bhaktivedanta Swami Prabhupada, the Founder-Acarya of the International Hare Krishna Movement (ISKCON)

For full details, including required registration, please go to: 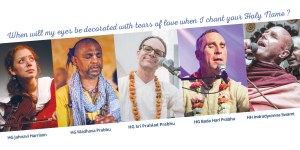 On May 10th 2016, while on travelling book distribution Sankirtan, I had the opportunity to visit the Deputy Prime Minister of Australia’s electoral office in Tenterfield NSW , Honorable Barnaby Joyce MP. Unfortunately he was absent. But his secretary gracefully accepted copies of Reservoir of Pleasure, Higher Taste and Bhagavad-Gita As Is It. Jai Srila Prabhupada! 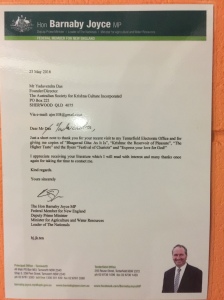 As of southern hemisphere spring 2014, there is a new cookbook publication available.
EXACTLY WHAT THE MARKET NEEDED AT THE RIGHT TIME !

WITH LOVE by Raje from Poland. 108 vegan recipes with many gluten free options. A light-heated and easy-to-follow vegan cookbook for everyone who wants to bring a compassionate and healthy diet into their life. Each book sold sponsors two (2) free meals at HKFFL. Thank U for Ur support. $29.99
To order a copy please follow instructions in book store page or just email us ajm108@gmail.com 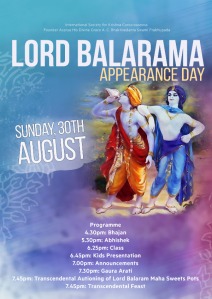 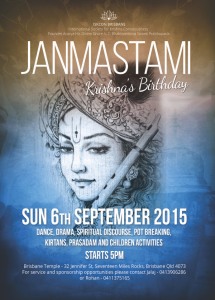 It’s the 50th anniversary of Srila Prabhupada setting foot on the Jaladutta to begin His journey to America. The beginning of ISKCON 50th celebrations worldwide!

Excerpt from Your Ever Well Wisher by HH Satsvarupa Das Goswami:

“Calcutta, August 13th, 1965
The Jaladutta is a regular cargo carrier of the Scindia Steam Navigation Company, but there is passenger cabin onboard. During the voyage from Calcutta to New York in August and September of 1965, the cabin was occupied by ‘Sri Abhoy Charanaravinda Bhaktivedanta Swami’, whose age was listed as sixty-nine and who was taken on board bearing a ‘complimentary ticket with food’.

The Jaladutta, under the command of Captain Arun Pandia, whose wife was also on board, left at 9:00am on Friday, August 13. In his diary, Bhaktivedanta Swami noted: ‘The cabin is quite comfortable, thanks to Lord Sri Krishna for enlightening Sumati Morarji for all these arrangements. I am quite comfortable.” But on the fourteenth day he reported: ‘Sea-sickness, dizziness, vomiting – Bay of Bengal. Heavy rains. More sickness.’