The importance of chanting daily 16 rounds minimum of Hare Krishna Maha Mantra, as set forth by Srila Prabhupada, the Founder-Acarya of ISKCON and Founder of the BBT and the BTG magazine, which will take about 2 hours of your time. 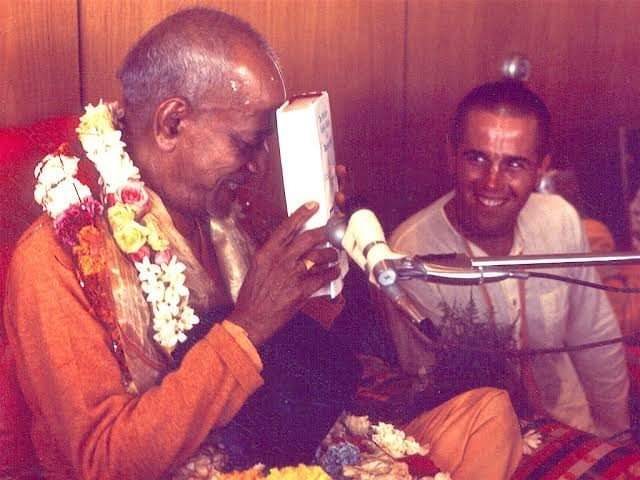 By Nanda Kumar Dasa (ACBSPgen.1) who was Srila Prabhupada’s personal servant in the early years of ISKCON.

From the time I took initiation from Srila Prabhupada in Los Angeles in June of 1969, I was blessed to be able to keep my vow of chanting 16 rounds a day for some time.

Then not long after becoming Srila Prabhupad’s cook and personal servant, I missed doing 16 rounds for the first time.

It was late in the evening and I had finished 14 of them but was having a hard time staying awake to finish the last 2.

Because we had been told that if you miss any rounds you can make them up the next day, I decided to take rest and do that, instead of pushing through the tiredness and chanting inattentive rounds.

The next morning when I went into Srila Prabhupada’s room, He looked at me and the first thing He said was… “So, are you chanting all your rounds?”

He had the mystic ability to know everything about everyone without anyone telling Him. I experienced it many times, with myself and with other devotees.

I replied… “No, Srila Prabhupad. I missed two rounds yesterday for the first time, and I’m going to make them up today.”

Srila Prabhupad said, with great compassion… “It is like a new child learning to walk. The child will fall down as they first start walking, but because they are holding the hand of the mother, they don’t actually fall… she holds them up.

It’s the same with chanting 16 rounds. Every devotee as they are growing will start to fall down, over and over, just like the child.

However, if you are chanting all your rounds, Krishna will hold you up and not let you fall, just like the mother does with the child.

If you are not chanting 16 rounds, however…” and He stopped for a moment and opened His lotus eyes very wide, moving His hand back and forth in front of His face, and He continued… “then your whereabouts are unknown!”

To understand what that really means, that our whereabouts are unknown and that we don’t have the protection of Krishna’s hand to hold us up, is a very fearful concept, all things considered.

I pray for the strength to be able to always keep my promise to Srila Prabhupad that I will chant 16 rounds a day.

I have become weak in that vow over time, and it is time for me to get serious, as there is not that much time left in this body.

To all the devotees who have kept that vow, I offer my humble obeisances.
All glories to His Divine Grace Srila Prabhupada”

Srila Prabhupada explains the importance of chanting every day 16 rounds minimum of the Hare Krishna Mantra and how Krishna will protect us if we strictly follow that vow. This particular example is so touching that chanting our sixteen rounds should really becomes a compulsion after reading it. In other words, if we are good boys and girls, Krishna will personally take care of us, especially in moments of difficulty, which will happen unfailingly. And who will be so foolish and careless as to neglect one’s self interest and fail to experience that feeling of total protection by higher authorities.

First of all, there is the power of sound.  The Bible says: ” In the beginning there was the Verb.” Et verbum caro factum est. or the Verb became flesh. Verb means sounds. We, Gaudiya Vaishnavas, will say in the beginnig there were the syllables ta and pa: tapa for tapasya. Again in the beginning there is sound. So sound is the beginning. Tapasya means austerity. Is austerity not welcome in the modern world? Sometimes we get this impression. There are however many people who are working very hard in the modern world. Any serious thing requires hard work. Tapa is the sound Lord Brahma heard first, while situated on the lotus flower sprouted from the navel of Lord Vishnu lying on the Garbodaka ocean within the universe, so Garbodakashayi Vishnu.

Where else but on book distribution sankirtan can we realize the power of sound. One enters into a shop and even if no one can be seen simply by saying loud and clear: “Good day Madam” or “Good day Sir” soon you will have at least one human face in your front and the sankirtan procedure begins.  The sankirtan procedure can be summed up in five words: “Please accept a Prabhupada book.” Chanting our sixteen rounds minimum of Hare Krishna Hare Krishna Krishna Krishna Hare Hare / Hare Rama Hare Rama Rama Rama Hare Hare also represents the backbone of our mental, intellectual and spiritual balance in Krishna consciousness. The cultivation of Krishna consciousness can sometimes be felt as mind storming, because we are expected to relinquish our misconceptions and adopt the real perspective on life, the main line being: ” I am not this body, I am spirit soul, eternal servitor of God, Krishna.” And it is a fast paced world in general. I remember one occasion when Srila Prabhupada was so pressed for time that he chanted His gayatri mantra while walking to the waiting limousine. Srila Prabhodananda Saraswati gives the following example:

“This is a verse by Prabhodananda Sarasvati, a great devotee of Lord Caitanya. He submitted this verse, that dante nidhaya trnakam padayor nipatya: “My dear sir, I have taken a grass in my mouth, and I am falling down on your feet, and I am flattering you hundreds of ways,”aham bravimi, “I am submitting something to you.”
So those who are going to preach this philosophy, they have to adopt this means. Humbly, most humbly, submissive, padayor nipatya krtva ca kaku-satam aham bravimi. He sadhavah: “You are very nice man. You are very honest man, sadhu.” Sakalam eva vihaya durat! “You give up all these nonsense things! Any nonsense, give up. Simply,”sakalam eva vihaya durat caitanya-candra-carane kurutanuragam, “simply you submit unto the lotus feet of Lord Caitanya and chant Hare Krsna.” Thank you very much. Lecture on Sankirtana – November 30, 1969, London. So giving up non-sense thing also means giving up our nonsense conceptions of life. So it is a kind of voluntary brain washing indeed, provided there is brain present of course. So yes in the begining, the cultivtion of Krishna consciousness can be a little destabilizing. Best thing is to take shelter of the sound vibration Hare Krishna Hare Krishna Krishna Krishna Hare Hare  /  Hare Rama Hare Rama Rama Rama Hare Hare and never let go, even if everything seems hopeless. Given time things will become very much hopeful again.

Imagine a body without a spine. It cannot exist. Similarly chanting our sixteen rounds minimum daily of Hare Krishna Hare Krishna Krishna Krishna Hare Hare /  Hare Rama Hare Rama Rama Rama Hare Hare is the center of our all other activities in Krishna consciousness. Sometimes we may think that we are too busy with other services to Krishna to chant our daily minimum of sixteen rounds and after all, it’s all one service to Krishna. It is indeed all one transcendental service to Krishna but the parampara advises that one must keep a certain number of names and here is Srila Prabhupada’s quote CC Madhya 7.37: