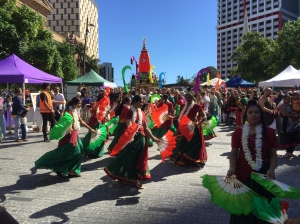 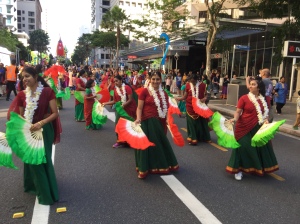 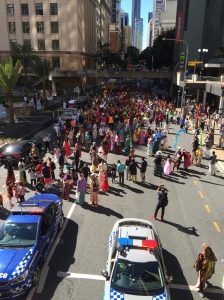 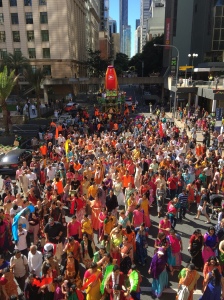 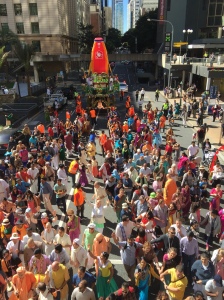 First thing in the morning, on RATHAYATRA day, during Mangal Aratik at 04.30 hours (and before indeed), Their Lordship Sri Sri Gaura Nitai displayed Their transcendental pastimes. They made the middle-row-of-temple-ceiling-lights-across flash constantly by divine intervention. There was no apparent reason for the flashing. They just flashed. Five bright lights flashed all together for quite some time. They had never flashed before in such a fashion. It looked very festival like!!! Thank you to and all glories to Their Lordships Shri Shri GAURA NITAI !!!

Then we went through the morning program and every one was very busy with their services to the Supreme Personality of Godhead. It was decided that His Holiness Kadamba Kanana Maharaja, who had just flown into town, would NOT give Srimad Bhagavatam class. Later he confirmed to me that it was the right decision, as this allowed him a small respite from his heavy international schedule.

The second consideration was that attendance to Srimad Bhagavatam class on RATHAYATRA DAY would decrease, as every one was busy with their respective services. I decided to give class anyway and attendance was about ten souls, which is good attendance, as per small temple standards. We should always remember that Srila Prabhupada advised us to never become discouraged and to give class to the bare walls, if we have to. Most importantly all programs as instituted by Srila Prabhupada Himself must go on simultaneously, without any interruption and in proper sequence, including the distribution of caranamrita after Deity greetings. This important function has recently been neglected and almost forgotten by ISKCON devotees in Brisbane. And that is why I mention it. Perhaps it is because they are too much eager to proceed with Guru Puja or worship of the Founder-Acarya of  The International Society for Krishna Consciousness, His Divine Grace A.C. Bhaktivedanta Swami Prabhupada, in which case they cannot be blamed. The distribution of the transcendental caranamrita nectar coming from the bathing of Their Lorsdship however, must go on as well and in proper sequence, as instituted by Srila Prabhupada Himself.

In His great wisdom, Srila Prabhupada instituted in ISKCON both pancaratriki viddhi (deity worship), as well as Bhagavat marg or anything to do with the books, shastra and the preaching effort outreach. Both must go on, just as a train needs two parallel rails to move forward. Every single temple program sequence in the ISKCON temples around the world is the same and Srila Prabhupada has instituted it with great thoughtfulness and specific purpose in mind. Our job is therefore super simple. We simply follow. This following definitely includes compulsory, daily attendance to Mangal Aratik for temple residents. We do not add anything. We do not subtract anything. And thus proceed straight on the path of an astounding success to come. Just watch.

Before RATHAYATRA procession, I tried to distribute Srimad Bhagavad-Gita As It Is to passers by and I found that people in their sheer vanity did not show much interest. The night before I had a very interesting experience, which strictly illustrates Srila Prabupada words to the effect that those who do not worship G – O – D, invariably develop a tendency to worship D – O – G and associated entities. There was a small group of people admiring two grey coloured and mid sized dogs on leash. Quite a boring matter really! I approached a lady and a gentleman and offered BGAII. The lady made immediately the following well assured and as if well informed statement: “ I dont believe in a God. There is no God!” Here we have this atheistic credo from the dog worshiping lady. Srila Prabhupada’s observations are always so very accurate! Srila Prabhupada is definitely the most scientific sankhya-yogi. He analysed the material nature with scientific rigor and gave His final verdict in His wonderfull books and classes. BGAII 5.5 “One who knows that the position reached by means of analytical study can also be attained by devotional service, and who therefore sees analytical study and devotional service to be on the same level, sees things as they are.” All glories to Srila Prabhupada, the Guru of the whole world!

Right from the beginning, the kirtan was exuberant. The devotees danced wildly at the rhythm of the mrdanga drums and cartal cymbals. It is a fact that if played well, the sound of the mrdunags is strong, compelling and sweet as confirmed in the Gaura-arati: “Shankha baaje ghantaa baaje baaje karataala madhura mridanga baaje parama rasaala” in English: ”Conchshells, bells, and karataalas resound, and the mridangas play very sweetly. This kiirtana music is supremely sweet and relishable to hear.”

It was as if a tsunami of joy and happiness inundated the mundane-noises-filled Central Business District of Brisbane. The high pitched voice of the lead singer, His Holiness Kadamba Kanana Maharaja could be heard all over. It was well amplified. His piercing voice surely pierced the three layers of the modes of material nature in the hearts of the conditioned souls. It surely also went all the way to Goloka Vrndavan to attract the attention of Srimati Radharani. To attract the attention of Srimatee Radharanai is a sure way to attract the attention of Sri Krishna, the Supreme Personality of Godhead. And if the Supreme Personality of Godhead smiles upon us, then not only is our life successful but the whole world becomes filled with joy and happiness as well. All glories to Sri Krishna, the protector of the cows and the brahmanas !!!

“My Lord, You are the well-wisher of the cows and the braahmanas, and You are the well-wisher of the entire human society and world.” (Vishnu Puraana 1.19.65) The purport is that special mention is given in that prayer for the protection of the cows and the braahmanas. Braahmanas are the symbol of spiritual education, and cows are the symbol of the most valuable food; these two living creatures, the braahmanas and the cows, must be given all protection—that is real advancement of civilization. In modern human society, spiritual knowledge is neglected, and cow killing is encouraged. It is to be understood, then, that human society is advancing in the wrong direction and is clearing the path to its own condemnation. A civilization which guides the citizens to become animals in their next lives is certainly not a human civilization. The present human civilization is, of course, grossly misled by the modes of passion and ignorance. It is a very dangerous age, and all nations should take care to provide the easiest process, Krishna consciousness, to save humanity from the greatest danger.” BGAII 14.16, purport.

We sung our hearts out:” Jai Jagannath, Jai Jagannath, Jai Baladeva, Jai Subhadra.” or in English “All glories to Lord Jagannatha, all glories to His brother Lord Baladeva, and all glories to Their beautiful sister Subhadra.” We also sang the refrain to the Jagannath Astaka, in the sweet melodies found in the movies “Nimai of Nadia” and “Nilacala Mahaprabhu”: “Jagannaathah Swaamii nayana-patha-gaami nayana patha gaami bhavatu me.” in English  language “May Lord Jagannaath be the object of my vision.” Certainly emotions were felt in relation to the Supreme Personality of Godhead, Sri Krishna. There was also a group of colourful, choreographed lady dancers in the front of the parade.

The weather was excellent. It was also a time to meet up with old friends of devotional service. Once back at St George’s Square in front of City Hall, immediately several lines formed for the famous and most popular free prasadam feature of Hare Krishna festivals. Prasadam means food that is first offered to the Lord in sacrifice by qualified brahmanas and excludes things such as meat, fish, eggs, onion and garlic, these items belonging to the modes of ignorance or tama guna.  The festival went on for a few more hours of transcendental entertainment.

One eager participant-spectator summed it all up in a few words. He said the HARE KRISHNA MAGIC IS HERE and he showed me in his bag an Indian kurta or shirt that he had just purchased. He was very proud to have the same shirt as the devotees. As Srila Prabhupada writes: “Imitation of a good thing, represents itself a good thing.”

This yearly festival was organised by the Brisbane branch of The International Society for Krishna Consciouness founded in 1966 in New York, USA, by His Divine Grace A.C. Bhaktivedanta Swami Prabhupada, also Founder of the Bhaktivedanta Book Trust and the Back to Godhead magazine. It was edition number 6. His Grace Sriman Dvijavara Prabhu, disciple of His Holiness Indradyumna Maharaja, deserves special mention for leading a team of dedicated, expert and hard working volunteers to make this festival a resounding success.

Several city dignitaries accepted our invitation and sought the favor of Lord Jagannatha, the Lord of the Universe as follows by alphabetical order. We cordially thank them for their esteemed presence!