Sunrise 28 March 2017, 6.32 AM, from the flat rooftop of ISKCON Chandigarh Temple building. 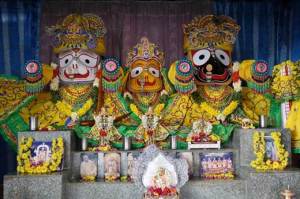 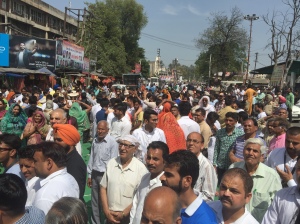 Organized by the kind, genuine and expert devotees of ISKCON Chandigarh and Patiala, Patiala Ratha Yatra was help on March 25th 2017 and was indeed a resounding success, with local dignitaries attending the parade. Thousands and thousands of people participated. Throwing whole flowers and petals from balconies, washing the feet of the Holy Name, chanting and dancing in ecstasy, the whole town in fact participated. Humble apologies to my readers, as I did not take pictures of the cart itself. I was too busy dancing on the sound of the melodious Hare Krishna Mantra melodies.

As per ISKCON tradition and Vaishnava school recommendation, succulent prasadam was distributed free of charge to one and all at the end of the parade which lasted not less than six or seven hours. It may have lasted eight hours. (An after event check confirmed that the parade in fact lasted seven and a half hours from 2 PM to 9.30 PM. That is perhaps the longest ISKCON Ratha Yatra parade on record.) As Srila Prabhupada says in 760924SB.Vrn: “So at least we Indians, we are trained up like that. Not only trained up, we are born devotees. Anyone who has taken birth in India, that is special facility. In their previous birth, they had performed many austerities, much austerities. Even the demigods, they desire also to take birth in India to get this opportunity. So India… Don’t think… India means this planet, Bhäratavarsha.”

We would say they (the Indians) have an unfair advantage over those born elsewhere!!! (smile) Only a very few, rare individuals, under the influence of modernism, were annoyed by the parade and road obstruction created thereby. Riding their motorbikes, they disrespectfully tried to push through the parade anyway. Fortunately the police stopped them.

The temple complex itself is an area of about 3 acres in sector 36 B of the town of Chandigarh, which features many parks, where people go about their morning routine such as jogging, walking or yoga. There is a park next to the temple that extends over three blocks.

Therein I have seen people chanting the pranava Omkara, which is not different from Krishna. “Pranava sarva vedesu”, “I am … the syllable om in the Vedic mantras” BGAII 7.8. But many people already chant in fact the Hare Krishna Mantra. For those who don’t, it often takes only minimum prodding to get them to join the chanting. The French architect Le Corbusier designed Chandigarh.

According to His Grace Akruranandan Prabhu, temple vice-president and my local reference and director, all temple complex improvements have been erected or at least were caused to be erected by the devotees themselves. It functions very efficiently under the expert guidance of His Grace Nanda Maharaja Prabhu, a householder, as his name will not indicate. In ISKCON, generally when we hear “Maharaja”, we think renounced order of life. But if we take the meaning of “Maharaja” as leader, president or saintly king, then “Maharaja” is totally appropriate indeed. HG Nanda Maharaja Prabhu is a disciple of His Holiness Gopal Krishna Maharaja, a long time initiating guru and GBC in ISKCON.

There are at least 20 Brahmacaris based at ISKCON Chandigarh.

The temple room itself measures an impressive 96 feet times 72 feet. (one foot equals 0.3048 m), with 7 columns on each side supporting a two storey high roof. There are two extra columns across in the back of the temple room. Deity area and inside back alley are additional length. There is a large reception area before entering the temple room itself. Marble tiles 60 cm X 30 cm are intertwined around one a central 30 cm X 30 cm tile, as if representing the whorl of a lotus flower. This design is repeated over and over again. All around the temple room there is a border with the very same design but the size of the tiles is halved.

We feel the devotees of Chandigarh have very much imbibed Lord Caitanya’s mood of Sankirtan and are dedicated preachers. As Sri Caitanya Mahaprabhu says in Sri Caitanya Caritamrta Madhya 7.128:

“Instruct everyone to follow the orders of Lord Sri Krishna as they are given in the Bhagavad-Gitä and Srimad-Bhägavatam. In this way become a spiritual master and try to liberate everyone in this land.”

I beg to thank very much the devotees of ISKCON Chandigarh for their kind hospitality and personal care, as well as for their wonderful and enriching association. Jai Srila Prabhupada!