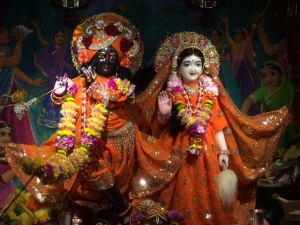 It is a fact that the more we offend Srila Prabhupada in particular, as the Founder-Acarya of the International Society for Krishna Consciousness, and Guru in general and fail to follow Their instructions, the less They are going to be with us and the less Srila Prabhupada is sitting on the Vyasasana, even though with our gross senses we may see His murti sitting on the Vyasasana. These are natural inter-personal dynamics applicable both in the mundane and spiritual realm.

If you offend me, I would rather not find myself in your association if only to avoid further and more aggravated conflict. This is an example only! In other words, to leave the place of offence and the association of the offender is a passive but highly effective method of conflict resolution, which is a very popular and Kali-yuga relevant subject matter. This is confirmed in principle by Lord Shiva’s wife, Sati, in Srimad-Bhagavatam (4.4.17):
“If one hears an irresponsible person blaspheme the master and controller of religion, he should block his ears and go away if unable to punish him…..”

Lord Indra lost an important battle because he neglected his own Guru. If we neglect Srila Prabhupada or Guru and Their instructions, to the extend of our neglect, They will leave and neglect us in return and ultimately we shall become plain losers as well. Please beware!