19 Aug 2014, SRILA PRABHUPADA VYASAPUJA or celebration of the Birthday Festival of the Spiritual Master. 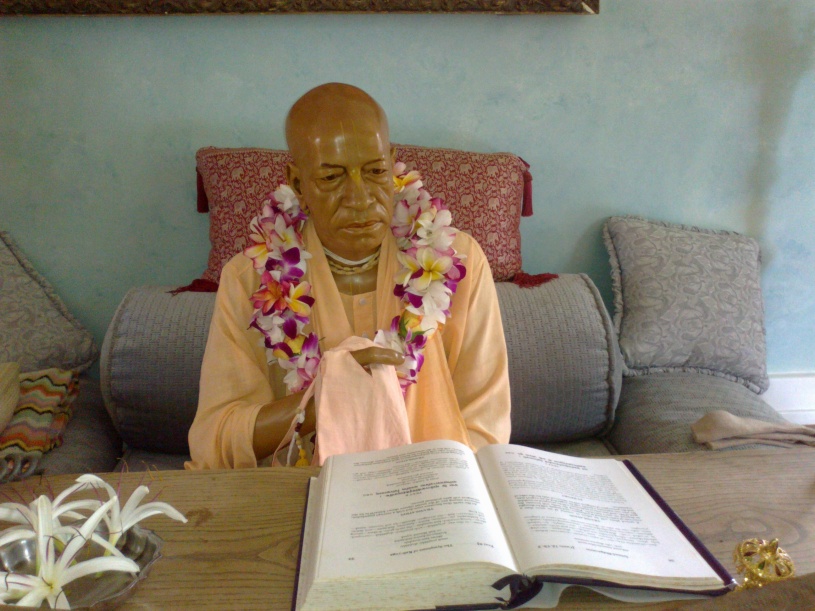 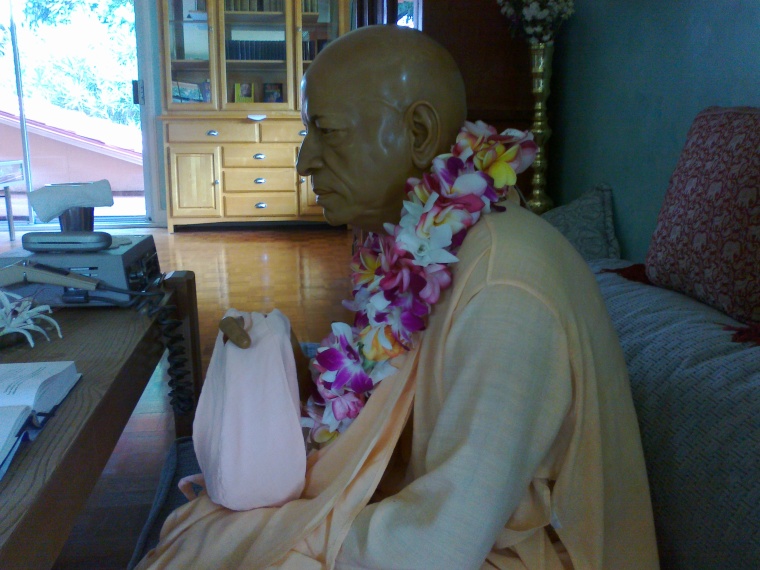 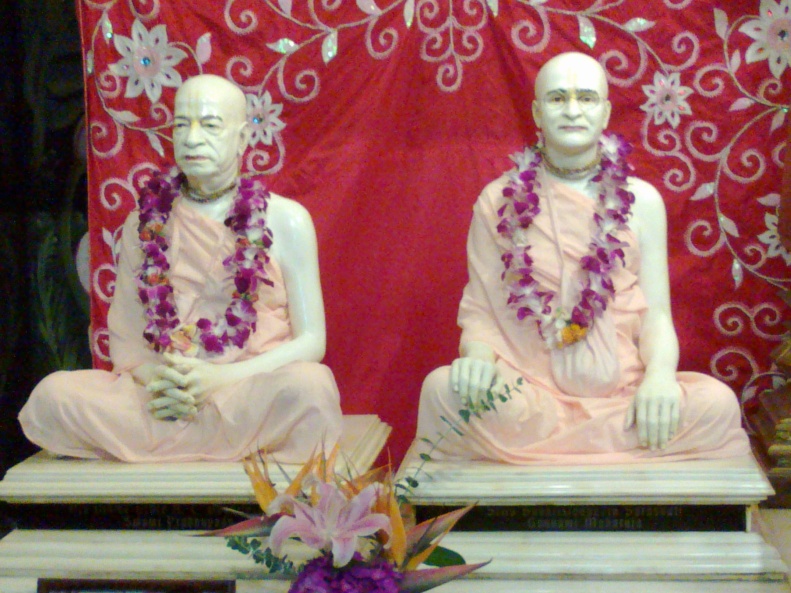 On the occasion of your appearance day 2014, “I offer my respectful obeisances unto my spiritual master, His Divine Grace A.C. Bhaktivedanta Swami Prabhupada who with the torchlight of knowledge, has opened my eyes, which were blinded by the darkness of ignorance.”

Srila Prabhupada, your kind and magnanimous guidance is an ongoing process. Your books are scintillating spiritual stars that offer us constantly various bright and enlivening insights into the science of love of God. We have to assume that this sparkle and shining is uninterrupted, even though our receptivity may be graduated or intermittent.

Here is one such glorious ray:
“ A bona fide spiritual master chants the holy names Hare Krishna, Hare Krishna, Krishna Krishna, Hare Hare/ Hare Rama, Hare Rama, Rama Rama, Hare Hare, and the transcendental sound vibration enters the ear of the disciple, and if the disciple follows in the footsteps of his spiritual master and chants the holy name with similar respect, this chanting constitutes worship of the transcendental name. When the transcendental name is worshiped by the devotee, the name himself spreads his glories within the heart of the devotee.” Teachings of Lord Caitanya Ch. 18

Your every single word is meant for our eternal benefit and pulls us progressively out of the baser modes of material nature.
Here is a nice quote to that effect: “We should always think that we are in the modes of ignorance. We are just trying to make progress from ignorance to goodness and then transcend. This is the process of spiritual realization. Nobody should think that we are perfect. We cannot be. God is… Only God is perfect, and we are all imperfect. Even our so-called liberated stage, we are still imperfect. Therefore one has to take shelter of authority because, constitutionally, we are imperfect.” 661226CC.NY

This year I would like to include the following prayer to the mind:

At times you feel so miserable.
Why are you attracted to the often-ghastly topics of the material world? Please remember Srila Prabhupada’s words that there is no happiness to be found in this material world. Ceasing to be an afflicted “sufferer”, why don’t you become an expert devotional surfer instead and permanently stay on the top of the crests of the incoming waves of devotional service. You will do well to remember the statement of Srimad-Bhagavatam, 1.2.6

“The supreme occupation [dharma] for all humanity is that by which men can attain to loving devotional service unto the transcendent Lord. Such devotional service must be unmotivated and uninterrupted to completely satisfy the self.”

Please do not take Srila Prabhupada’s institution ISKCON and contribution to the global advancement of Krishna consciousness for granted. It is nothing less than is a golden path.

1. Leaving India for the first time, there will be no need for someone to take a taxing ocean trip on the Jaladuta from Kolkata to Boston at the ripe old age of 69 and suffer several heart attacks on the way.

2.There will be no need for someone to start from scratch a global institution for Krishna consciousness, establish 108 temples all over the world and initiate some truly gargantuan temple construction projects.

4. There will be no absolute need for someone to travel 15 times around the world, lecturing twice a day and meeting news reporters, scientists, religious leaders, politicians and world renowned dignitaries and celebrities.

5. There will be no need for someone to become the topmost Bhakti-Vedantist, able to quote innumerable Sanskrit verses at a moment’s notice.

6. There will be no need for someone to publish 80 plus spiritual books, compose 6341 personal letters and establish a Bhaktivedanta Book Trust to publish them.

7. There will be no need for someone to create the world’s first vegetarian restaurant chain and introduce the Rathayatra festivals in major cities of the world, thus bringing the temple to the people.

8. And finally, provided we could go back in time, there will be no need for someone to start a monthly magazine called Back to Godhead on the 1944 appearance day of Om Vishnupada Bhaktisidhanta Saraswati Maharaja.
It is not even compulsory to get up at one AM daily, if one is not so endowed. But you will admit that it will indeed be a nice achievement in Srila Prabhupada’s footsteps and the footsteps of the other Goswamis.

Out of his great expertise, compassion and kindness, His Divine Grace A.C. Bhaktivedanta Swami Prabhupada, Lord Caitanya’s sena pati, has already accomplished all the above and much more for your personal benefit also.

He has made it easy for you. So please don’t be mudha-like. Mudha means “ass” or “rascal”. Please be reasonable and accept unreservedly His and Lord Caitanya’s joyous program of chanting the maha mantra

dancing and feasting. End of prayer.

Srila Prabhupada, I am happy to report that due to your mercy conjugated with my feeble efforts, Krishna consciousness has become manifest to some extent in my heart. Even if I were to try, I would be unable to extinguish it, just like it is difficult to suppress a forest fire in favorable circumstance, as we often experience in Australian summers. Somehow or other it reappears again and again. That seems to prove your postulate that Krishna consciousness is the common innermost energy and essence of all living entities. Krishna consciousness is the true golden path of self-realization. Funny thing is that when I was an altar boy and sacristan, the liturgy was in foreign language i. e. Latin. Now it still is in foreign language i.e. Sanskrit. Why did I take birth in the wrong culture?

“Prahlada Maharaja said: Hearing and chanting about the transcendental holy name, form, qualities, paraphernalia and pastimes of Lord Vishnu, remembering them, serving the lotus feet of the Lord, offering the Lord respectful worship with sixteen types of paraphernalia, offering prayers to the Lord, becoming His servant, considering the Lord one’s best friend, and surrendering everything unto Him (in other words, serving Him with the body, mind and words)—these nine processes are accepted as pure devotional service. One who has dedicated his life to the service of Krishna through these nine methods should be understood to be the most learned person, for he has acquired complete knowledge.”

Srila Prabhupada, You are so kind and attentive that You will not allow us even for a moment to be overcome by the bodily concept of life. Because the qualities of the modes of material nature are mentioned therein, we may meditate on BGAII 3.5 by contemplating our bodily restlessness. But in the very first sentence of the purport You immediately cut in and wake us up by stating that it is the soul who is always active and that the body is actually dead.
“It is not a question of embodied life, but it is the nature of the soul to be always active. Without the presence of the spirit soul, the material body cannot move. The body is only a dead vehicle to be worked by the spirit soul, which is always active and cannot stop even for a moment….”

We cannot expect proper respect for ourselves, if we are denying respect to You, Srila Prabhupada, the Founder-Acarya of the International Society for Krishna Consciousness and Institutor of the Bhaktivedanta Book Trust, either by declining to offer the articles of altar worship to You first on the Vyasasana, by retitling the sixth chapter of the BGAII against Your wishes, or generally speaking by turning our back to You literally or figuratively. It takes only two steps to turn away from the sun and face the shadow. Similarly Maya is only two steps away at all times. In the Katha Upanisad (1.3.14) there is the emphatic call:

“Please wake up and try to understand the boon that you now have in this human form of life. The path of spiritual realization is very difficult; it is sharp like a razor’s edge. That is the opinion of learned transcendental scholars.”

Let us first of all show full, all round respect where it is most due, that is in our relationship with Krishna’s representative, You, Srila Prabhupada. Then we shall automatically be respected also.

In a totally different context, I have witnessed how one young lady-disciple of HH Indradyumna Maharaja, and author as well, expressed on his birthday celebration her attachment and affection for her spiritual master and how she called him “her father”. I feel I am respectively in the same position. You have created a wonderful and unique family wherein we can grow and cultivate spiritual relationships.
Out of all human beings, I have met physically or through their writings, I find your association most enriching, your style most endearing! You are the perfect master, PhD and post graduate in the Science of Krishna consciousness, the king of education and most confidential knowledge as well. Your company is never boring. It is always a new and fresh adventure.

You explain that there are different Sanskrit terms for friend, out of all these nomenclatures, “suhrit” means the best friend because he has our own best interest in his heart at all times. Su means very good, very favorable and hrit means heart. You are truly suhrit, our ever well-wisher, not only for your direct spiritual descendants but also for the whole of mankind. You are not sentimental though and if tough love is required, as Prime Minister Abbot calls it here in Australia, you will use it.

You always speak the unadulterated transcendental message. You never speak nonsense or attempt to fool or cheat people as others in various sphere of life will do. Your mind and arguments for the Personal Absolute Truth are as fast as lightning. No asura can bypass Durga, similarly no one can bypass your intellect for the Personal Absolute Truth. You always stand tall and undefeated just like Aniruddha in his fight against his future father in law Banasura and before the use of the overwhelming naga-pasha or snake-noose weapon. (Krishna book Chapter 62)
“…. we are not concerned to hear any rascal. We want to hear Krishna. We are not prepared to hear any rascal, so-called scientists and so-called philosopher, so-called God. No. We are not prepared. Because everyone is rascal. Everyone is full of mistakes, everyone is trying to cheat others, everyone is illusioned, and everyone’s senses are imperfect. How he can give knowledge perfect? That is not possible.
Therefore, we have to select guru. Guru means Krishna. As Arjuna has selected guru, shisyas te ‘ham sadhi mäm tväm prapannam: [Bg. 2.7] “I am, I become Your shisya, disciple, and I surrender unto You.” So to get perfect knowledge, we have to find out Krishna or Krishna’s bona fide representative.” 730821BG.Lon

Thank you very much, Srila Prabhupada, for showering the nectar of Krishna consciousness upon us. May my ability to taste it never wane. May my ability to taste it ever increase exponentially instead.
We acknowledge unhesitatingly your vast superiority and gladly offer our prostrated obeisances again and again at your holy lotus feet.
Jai Srila Prabhupada! All glories to you!
Trying to be a good disciple,
Your servant,
Yadavendra das
http://www.krishnaculture.org