Indigestion caused by excessive intake of ghee and how to cure it by Srila Prabhupada. 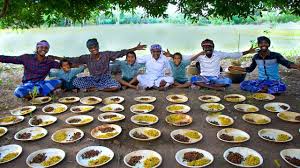 In Caitanya Caritamrta, Adi 10.49, purport, we learn that even Lord Caitanya Himself was victimized by such practice:

“Once Shivänanda Sena offered food to Lord Caitanya that had been cooked with excessive ghee, and the next day the Lord became sick and went to Muräri Gupta for treatment. Lord Caitanya accepted some water from the waterpot of Muräri Gupta, and thus He was cured. The natural remedy for indigestion is to drink a little water, and since Muräri Gupta was a physician, he gave the Lord some drinking water and cured Him.” Copyrights BBT.

Once I took dinner at

and as a direct result, at 1 or 2 am the next morning, I woke up and had to evacuate very quickly. Later it was admitted that the cook may have used too much ghee.

The best remedy to cure the material disease of the spirit soul is to chant as much as possible:

The recommended number of mantras is a minimum of 1728 daily mantras, which represents two hours of dynamic meditation.

“Muräri Gupta could treat both bodily and spiritual disease because he was a physician by profession and a great devotee of the Lord in terms of spiritual advancement. This is an example of service to humanity. Everyone should know that there are two kinds of diseases in human society. One disease, which is called adhyätmika, or material disease, pertains to the body, but the main disease is spiritual. The living entity is eternal, but somehow or other, when in contact with the material energy, he is subjected to the repetition of birth, death, old age and disease. The physicians of the modern day should learn from Muräri Gupta. Although modern philanthropic physicians open gigantic hospitals, there are no hospitals to cure the spiritual disease of the spirit soul. The Krishna consciousness movement has taken up the mission of curing this disease, but people are not very appreciative because they do not know what this disease is. A diseased person needs both proper medicine and a proper diet, and therefore the Krishna consciousness movement supplies spiritually stricken people with the medicine of the chanting of the holy name, or the Hare Krishna mahä-mantra, and the diet of prasädam. There are many hospitals and medical clinics to cure bodily diseases, but there are no such hospitals to cure the spiritual disease of the spirit soul. The centers of the Krishna consciousness movement are the only established hospitals that can cure man of birth, death, old age and disease.” Copyright BBT