Some technical information for yogis, especially hatha-yogis from Bhagavad-gita As It Is 2.17 by His Divine Grace A. C. Bhaktivedanta Swami Prabhupada. 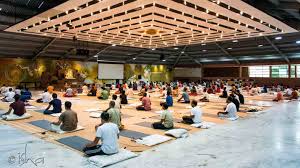 That which pervades the entire body you should know to be indestructible. No one is able to destroy that imperishable soul.

This verse more clearly explains the real nature of the soul, which is spread all over the body. Anyone can understand what is spread all over the body: it is consciousness. Everyone is conscious of the pains and pleasures of the body in part or as a whole. This spreading of consciousness is limited within one’s own body. The pains and pleasures of one body are unknown to another. Therefore, each and every body is the embodiment of an individual soul, and the symptom of the soul’s presence is perceived as individual consciousness. This soul is described as one ten-thousandth part of the upper portion of the hair point in size. The Shvetäshvatara Upanishad (5.9) confirms this:

“There are innumerable particles of spiritual atoms, which are measured as one ten-thousandth of the upper portion of the hair.”

Therefore, the individual particle of spirit soul is a spiritual atom smaller than the material atoms, and such atoms are innumerable. This very small spiritual spark is the basic principle of the material body, and the influence of such a spiritual spark is spread all over the body as the influence of the active principle of some medicine spreads throughout the body. This current of the spirit soul is felt all over the body as consciousness, and that is the proof of the presence of the soul. Any layman can understand that the material body minus consciousness is a dead body, and this consciousness cannot be revived in the body by any means of material administration. Therefore, consciousness is not due to any amount of material combination, but to the spirit soul. In the Mundaka Upanishad (3.1.9) the measurement of the atomic spirit soul is further explained:

“The soul is atomic in size and can be perceived by perfect intelligence. This atomic soul is floating in the five kinds of air (präna, apäna, vyäna, samäna and udäna), is situated within the heart, and spreads its influence all over the body of the embodied living entities. When the soul is purified from the contamination of the five kinds of material air, its spiritual influence is exhibited.”

The hatha-yoga system is meant for controlling the five kinds of air encircling the pure soul by different kinds of sitting postures—not for any material profit, but for liberation of the minute soul from the entanglement of the material atmosphere.
So the constitution of the atomic soul is admitted in all Vedic literatures, and it is also actually felt in the practical experience of any sane man. Only the insane man can think of this atomic soul as all-pervading vishnu-tattva. ………………Copyright BBT International.

Bhagavad-gita As It Is is available from this website for AUD 25.00, plus postage.  Other titles are available as well. Please go to “Bookstore.”